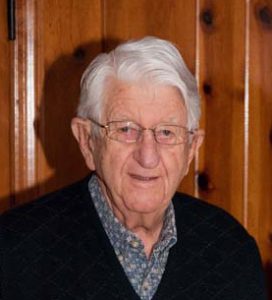 Richard L. Bird, 93, of Rockford MI, died peacefully on Tuesday, September 4, 2018. Richard is survived by his loving wife of 71 years, Leone (Dutkiewicz) Bird; his daughters, Susan (Eric) Edberg, Melissa (Fred) Burgoon, and Marcy (Virgil) Perry; his grandchildren Nathan Perry and Marissa (Danny) Horne. He is preceded in death by his parents, Lyle and Tillie (Scholpp) Bird, his only brother, Carroll, and grandson, Richard (Ricky) Burgoon. Richard graduated from Rockford HS in 1943 and was valedictorian of his class. He served as a Sergeant in the US Army during WW II. After his service, he attended the University of Michigan. Richard started his career in 1950 with International Harvester and after transferring to many different cities, he retired in 1983 and moved back on Bostwick Lake. In lieu of flowers, memorial contributions may be made to Our Lady of Consolation Church in Rockford or Great Lakes Caring Hospice. Visitation and a memorial mass will be scheduled later.